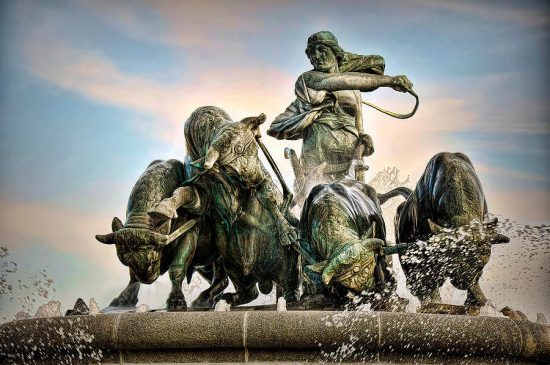 As a deity of fertility, Gefjun is a highly misunderstood goddess in the Norse myths. For example, some refer to her as a virgin, even though she is believed to have birthed four sons from mating with giants. The confusion could however be because goddesses were considered virgins if they were unmarried not based on their celibacy. Despite the many misunderstandings, there is one real mythology talked about Gefjun.

The mythology talks about a King named Gylfi, who ruled a vast amount of land now known as Sweden. To protect his beloved land, Gylfi put together a great army of the bravest and strongest men and women, so he was assured that his land would be safe. His army, however, was no match for Gefjun, who came into his kingdom from the East riding in a carriage pulled by four great oxen. It is believed that the four oxen were Gefjun’s four sons that she had turned to harness their might.

Mesmerized by the mysterious woman, King Gyfli wanted to keep her in his kingdom and so he offered her half of his wealth. To his surprise Gefjun refused. Determined to win her over, the King approached Gefjun again this time offering her as much land as she could plow in one day and one night. Gefjun accepted this and set off leaving the King satisfied thinking he had won her over. The following day, however, Gyfli woke up to find Gefjun was gone, along with a significant piece of his land. Gefjun had used the power of her oxen to plow deep enough and drag away the piece of land, now known as Zealand to its current Danish location. By the time the king could gather his mighty army, there was already a vast ocean between him and the Gefjun and so there was nothing he could do.

A different account, states that Zealand became landlocked not an Island. It is said that similar to the Korean goddess Halmang, Gefjung urinated around Zealand to separate it from the surrounding countries. This is the same way Halmang is said to have separated Jeju from the rest of Korea.

With Gefjun as its patron and local “mother earth”, Zealand grew to become the most populated and prosperous region in Denmark. This is thanks to the marriage between Gefjun and the demigod Skjold, one of Odin’s many sons. Some believe that the marriage between Gefjun and Skjold was a reward Odin gave to Gefjun for her deeds. Others believe the marriage was a result of Gefjun inviting Skjold to live in Zealand after his exile. Either way, Skjold was considered the King of Denmark. 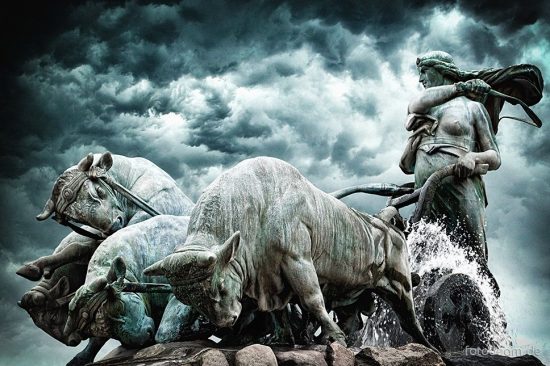 Out of all the misunderstandings that exist about Gefjun, the biggest debate is whether she is considered a giantess or a goddess, or both. Different accounts depict her as either one, hence it is difficult to say for sure. Although some scholars like John Lindow argue that she is a giant, others see her as an earth goddess. She is counted as a goddess among the likes of Jord and Gerdr, who are both giants by birth.

The first Aesir Norse god was considered to be a descendant of Ymir, a frost giant, therefore all gods were considered to be giants. Lindow argues that Gefjun couldn’t be a goddess, because gods were said to slay any giant who tried to mate with a goddess. Yet, Gefjun has four sons, all fathered by giants. Contrary to this argument, Snorri Sturluson, in the Prose Edda clearly describes Gefjun as a goddess from the race of Aesir. Even in his list, Snorri counts Gefjun with Freya and Frigg at the beginning of the list, separate from giantesses like Jord and Rind that he mentions at the end.

While both giants and gods have gifts and magical abilities, their biggest distinction is that, unlike the gods, giants do not use their abilities to help humankind. This is explained by the fact that gods have a closer affiliation to humans since they are the ones who created them after killing Ymir. By this logic, it is difficult to distinguish Gefjun’s act of taking Zealand and giving it to the Danes. In essence, she used giant abilities, to benefit humankind. Another distinction between gods and giants is that gods create worlds while giants don’t. In that case, by destroying Sweden to create Zealand, Gefjun proves to be a goddess, in the same way, Odin destroyed Ymir to create the human kind.

All things considered, it is difficult to tell whether Gefjun is truly a giant or goddess. Considering that Snorri clearly states she is a goddess, one is more inclined to go with the latter. Her actions of mating with giants and ripping apart lands are considered acts done in the interest of Aesir and humankind which could be why she got away with her deeds.

Based on the different references of Gefjun like in Prose Edda and Ragnarsdrapa by Bragi Boddason, here is a summary of some other interesting facts about Gefjun:

While Gefjun, Frigg, Jord, Freya, Fjorgyn, and Sif among others are all depicted as mother earth types of goddesses, they are not the same goddesses. Regardless of how slight their variations are, there are differences between them.