According to the Norse Mythology, several Norse gods were mostly from Aesir, among them, is Baldur. He was the youngest son (some believe that he is the only child) that Odin had with his beloved wife Frigg. The name Baldur is pronounced as BALD-er. In Old English and Old High German, he was called “Balder”. There is a lot of uncertainty about the meaning of his name. Most people believe it comes from the Proto-Indo-European “bhel” (white) or the Old Norse term “bal” (fire). The closest meaning considered the most accurate is said to be the Old Norse word “Baldr” (bold). Most scholars refuse this interpretation of his name, as it implies that Baldur had a war-like nature to him. This is contrary to how Baldur was considered by most, an innocent and passive god. 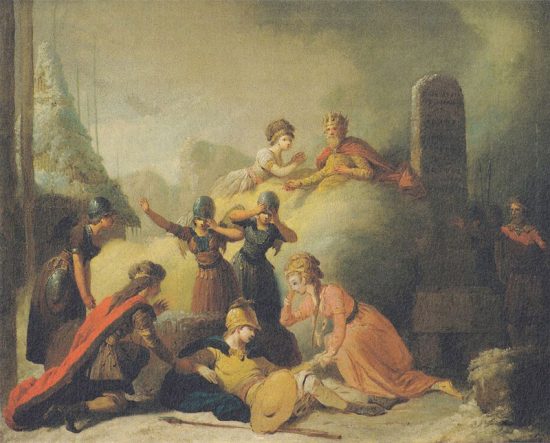 Baldur was the god of light, now called the dead god of light as you’ll see later on. He was the most favored and loved in Asgard and beyond the realm for his kindness and generosity. Being the most beautiful Aesir, Baldur was handsome and cheerful. He radiated light from himself where ever he went and his smile brought light to everyone he came across. The sacred plant associated with him was Chamomile. This was because it was white and brought sweet sleep to anyone who drank it. Even where he lived with his family, in the Breidablik hall, nothing impure could live or grow there, only beauty resided there.

Based on the saga of Baldur’s dreams, it’s said that Baldur started having nightmares of a coming doom that he later narrated to his parents. In desperation, his mother Frigg went across all nine realms asking every living thing to make an oath to never harm Baldur. On her quest, Frigg chooses to overlook the mistletoes since she thought they were harmless and too young to make an oath. Successful in her mission, Frigg went back and informed Baldur that he was safe now. Knowing nothing could hurt him, Baldur started a game where he would stand and let others throw missiles at him. Because they couldn’t hurt him, they simply bounced off of him.

When Loki the trickster heard this, he made a plan to kill Baldur. Some believe that it was an act of vengeance after the Aesir killed his wife Angrboda and imprisoned his son Fenrir. So, Loki found out from Frigg, that she had overlooked the mistletoes and fashioned a small spear out of one. He noticed the blind Hoder was sat at the corner alone offered to help guide his missile, even he could play. When Hoder agreed, Loki placed the small spear in his hand and helped him aim it at Baldur. The spear pierced Baldur and fell dead. The whole of Asgard fell into mourning, with the angered gods offering to seek vengeance on behalf on Baldur’s behalf. Odin however did not want them to be tainted by the act, so he refused, instead he sent Hermod to Hel to plead for Baldur to be returned.

Meanwhile, Odin raped a giantess named Rind who gave birth to a son named Vali. Vali’s sole purpose was to avenge Baldur’s death. Unfortunately, not knowing what truly happened, Vali ended up killing Hoder who had been duped by Loki. Hermod on the other hand, traveled for nine days on his father’s horse Selpnir until he reached the gates of Hel. There he found Baldur sitting at a place of honor looking pale and grim next to Hel. Hermod pleaded with Hel to release him, but she put forth a condition. Hel said that if truly Baldur was loved by all, then she would only release him if every living thing cried for him. So, all of Aesir went around all the realms asking every living thing to shed a tear for Baldur. All did apart from a giantess named Thokk, who said that Hel should keep her own. As a result, Baldur remained in Hel. He is, however, prophesied to rise again once Ragnarok comes to pass.

There are a lot of speculations, however, about his death. Most believe that it was Loki disguised as the giantess, as a way to keep Baldur in hell. Others believe that killing Baldur was a plan made by Loki and Odin as a way of protecting him from Ragnarok so that he would rise to be the ruler of Aesir once Ragnarok was over. 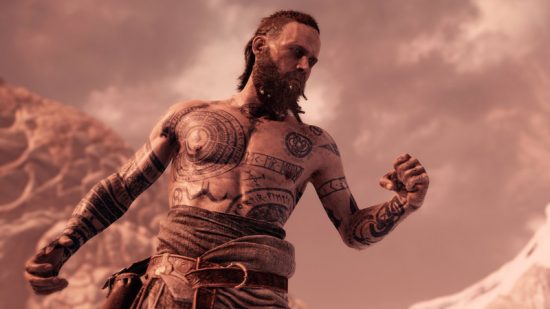 In the God of war series, Baldur’s character is very different from how he is depicted in Norse Mythology. To begin with, in the God of War series Baldur’s mother is Freya and not Frigg. Moreover, unlike Frigg who took an oath with every living thing to protect Baldur, Freya cast a spell of invulnerability on him. This spell led to him being unable to feel any sensation and so could not have any children, unlike in the Norse mythology where he had a son. While in the mythology he turned his invulnerability into a game, in the God of War, he became resentful, wishing he could feel something and taking out his frustration on others.

In Norse mythology, he is described as harmonious, passive, handsome, and delicate and is considered to be the god of light. In the game series, however, while he is handsome, he has a more rugged look about him, and he is instead filled with unhinged rage and thirst for vengeance. It is this thirst for vengeance against Freya, that helps Kratos and Baldur connect in the game despite being foes. This is because Kratos also needed to get revenge against Zeus, who was equally a powerful parent as Freya. As a result of their shared understanding, Kratos even discusses the wages of vengeance with Baldur.

Aside from their connection, Baldur is also seen to be the cautionary tale for Atreus, son of Kratos. This is because Kratos hasn’t been honest with Atreus and this could lead to him blaming Kratos in the future. Baldur is seen to maybe play a hand in this if Kratos doesn’t fix his relationship with Atreus. 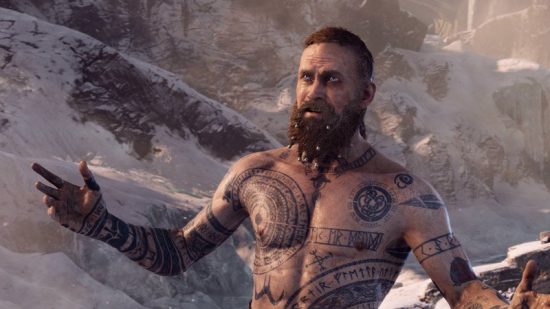 As the god of light and son of Odin, Baldur is considered to be among the most powerful gods of Aesir. His power is said to be surpassed only by Odin and his brother Thor. According to the God of War series, Baldur’s powers were great enough to face and challenge Kratos. The following is a summary of his powers and abilities:

Invulnerability: Of all his powers, Baldur’s greatest ability was his inability to feel. While he could be harmed, he could not feel the physical pain of his injuries. This allowed him to continue fighting despite being wounded. His invulnerability, however, comes at the cost of his senses. His inability to taste, feel, and smell is what drives him insane. His only weakness is mistletoe, which is said to be able to break the spell of invulnerability.

Manipulation of light: Being the god of light, Baldur can use light to his advantage in combat. Using light, he can send a shock wave through the ground, create explosive energy, increase the force of his attack and allow him to move at the speed of light.

Superhuman Speed and agility: Because of his ability to move at the speed of light, Baldur is much faster than his enemies in combat. His reflexes are fast allowing him to counter or block attacks before opponents like Kratos can react.

Superhuman durability: As a god, Baldur is strong even without his invulnerability. He is able to endure immense pain and punishment. In the God of War series, after the spell of invulnerability was broken, Baldur still managed to survive the pain of his shoulder’s being chopped by the Leviathan Axe. He also survived being stubbed in the gut by the blades of chaos and the multiple arrows shot at him by Atreus. Baldur only died when Kratos finally snapped his neck.

Immortality: Like all Aesir gods, Baldur had the power of immortality. Unlike the Greek gods, however, his immortality was conditional. This means that Baldur could be killed by a divine weapon or another mortal.

Superhuman Stamina: Due to his invulnerability and durability as a god, Baldur could fight endlessly. He showed no signs of fatigue, even during his fight with Kratos in the God of war series.

Superhuman strength: As the son of Odin, Baldur had immense strength that made him a worthy rival when fighting with Kratos. Even without his invulnerability, this fact remained true. His strength, however, was not as great as Kratos and adding to this, his deteriorating mental state led to his downfall in the end.

Elemental abilities: Aside from his ability to manipulate light, Baldur was cable of absorbing power from any element he was exposed to. He used the power to enhance his strength. For example, when Kratos chopped his shoulder with the Leviathan ax, Baldur absorbed its power of controlling ice and used it to his advantage. Similarly, when Atreus blew the undead Giant’s ring on top of Baldur, he absorbed the fire and used it to deliver a power-enhanced kick.

Expert tracker: Baldur’s ability to find any given target is unmatched by anyone in Aesir. In the God of War series, he can find Kratos despite the circumstance, whether it was in Jotunheim, Kratos’ home, or in the World Serpent’s stomach. 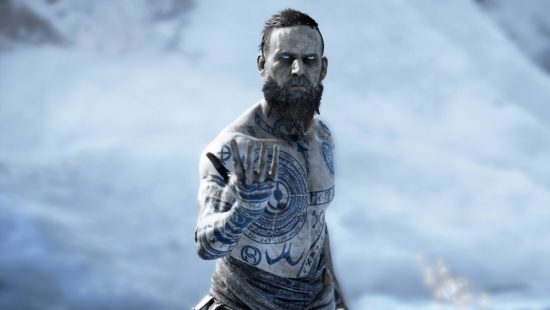 According to Norse mythology, Baldur is the son of Odin, the Allfather and chief god of the Aesir. His mother was Frigg, the goddess of wisdom and wife to Odin. Frigg was also believed to have the ability of foresight. Aside from him, Odin and Frigg had another son, Baldur’s brother Hodr, not to mention the several half-brothers fathered by Odin. Baldur’s half brothers include Thor, Tyr, Bragi, Heimdall, and Hermod. Vali was also considered the Baldur’s half-brother, birthed by the giantess Rindr after Baldur dies. Vali is said to have been conceived to avenge Baldur’s death. Before his demise, however, Baldur is said to have had a family of his own. He married the goddess Nanna and had a son named Forseti. While Baldur is known as the god of Light, his son Forseti is known as the god of Peace and Justice.

Based on the God of War series, however, Baldur is the son of Odin and Freya, who is a Vanir goddess and greatest practitioner of Seidr. Because Freya places a spell of invulnerability on him, Baldur has bitter resentment towards her, especially after she refuses to lift the spell. Thor, however, remains Baldur’s half-brother, with whom he is on good terms. Additionally, Baldur has two nephews, Magni and Moni. Otherwise, unlike in Norse mythology, Baldur doesn’t have a wife or child of his own, which only serves to increase his resentment towards his mother Freya.

Although the tales of Baldur differ based on the Norse mythology, God of War series, and the manuscripts written, Baldur remains one of the powerful Norse gods, aside from his father Odin and half-brother Thor. He is said to rise again and return after Ragnarok to lead the Aesir of Asgard.